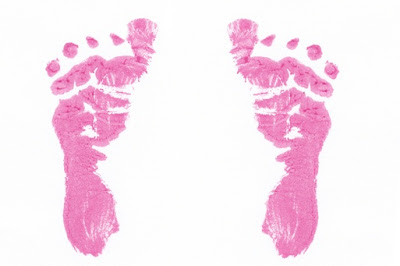 Today was ultrasound day! Yaaaaay! And, drumroll please, it's a girl! (Maybe I should have put the pink footprints AFTER the post to play up the suspense...or been really mean and put up blue footprints...hahahaha!) I was getting pretty worried because Whitney would just not accept the fact that it could be a boy. When I asked her if she would still love the baby if it were a boy she was pretty sure she wouldn't. Her excuse was, "But Heavenly Father really wants me to have a little sister!". Who knows, maybe it's big sister's intuition. After all, she named the baby Kate the day we found out we had another one on the way. I really think these two girls are going to have a special connection.

We've decided to name her Kate Rebecca Brimhall. I have just had the darnest time finding a middle name that sounded good and felt right. I was half way tempted to bribe Whitney to let me re-name her so I could find a name that was easier to find a middle name for. But, when we were at the temple doing baptisms with the youth I had been praying to find a middle name that would be meaningful and beautiful. I was actually praying about a name of one of Michael's converts in Mexico with whom he is very close to and just got that stupor of thought after the prayer. It sounded pretty together...but it just felt empty. Then, right in the middle of the stupor I heard the name "Rebecca" being read from the font. My eyes shot open and suddenly the light went "ding!" and I knew that was the name she should have. I was even more in awe because that is Rachel's middle name and I really had wanted to name her after Rachel somehow. (But, to name her Rachel would just be confusing and McKayla has the middle name Rachel....so....yeah) And it feels so good to have a name for this baby! It's a wonderful name and I just can't wait to hear her name when she is blessed. : )

Posted by Natalie at 8:08 PM 14 people leaving some love!

Oh yeah! I forgot to tell you about the ultrasound drama. So, two weeks ago the OB said the ultrasound clinic would call me to set up an appointment for the next week or so. Two weeks later, still no call. So, I called the OB and they said my records never got faxed. Then, after spending all morning on the phone calling between the OB and the clinic and finally getting my records faxed, the lady at the clinic tells me she doesn't have any openings for the next 6 weeks!!! I about died! Thankfully, she was merciful and squeezed me in on the 30th. So, I'm trying to be patient and just consider it the best late Christmas present ever! I can't wait!!!

Posted by Natalie at 11:18 AM 3 people leaving some love! 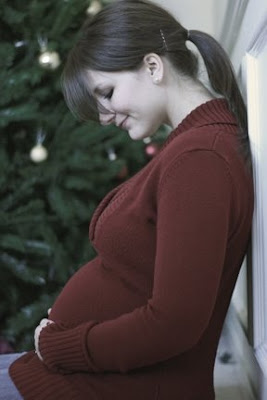 Merry Christmas, everyone! Here's the long awaited belly picture! This is at 5 months along. :)
Thanks again, Mandy!

Posted by Natalie at 9:38 AM 9 people leaving some love! 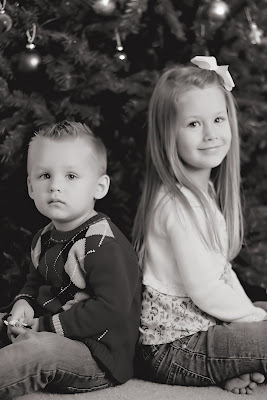 My AMAZING friend Mandy took this AMAZING picture of the kids for me today. I was over at her house because after my previous post she offered to do belly shots for me. (They'll be up soon!) Can you believe this is at her house just sitting in front of the tree? I swear it looks like a studio picture. She is so talented! I couldn't wait to share it with the world! Thanks, Mandy! :) Oh my gosh, I just LOVE my kids!!! *sigh*

Posted by Natalie at 10:36 PM 5 people leaving some love!

Joy To The World! No, Seriously!

Lots of good news today! We'll start with the most recent. Yesterday around 5:00 p.m. I looked outside and couldn't believe my eyes. It was SNOWING!!! Yes, that's right, SNOWING!!! I started screaming and jumping up and down like a little kid, I seriously started to cry! The kids were so excited to go outside and play in it. It wasn't very much, just enough to coat everything, but it was still just as exciting! Whitney had fun making snow angels on trampoline and trying to catch them on her tongue (probably not the cleanest snow here with all that pollution...oh well!), and poor Aaron was just getting frustrated that his hands were cold and his pants were getting wet. I tried to put gloves on him and he freaked out...poor little Texan boy who doesn't like the cold. It was even more beautiful after the sun went down and I stood by the window and watched the flakes fall in the light from the street lamps. Ahhhh, it was gorgeous! And hot chocolate never tasted more delicious! (Or could it be that I used whole milk, three scoops of cocoa, Nestle French Vanilla creamer, Amaretto creamer, and whipped topping on top?)

Second, and even more wonderful is that I had such an amazing Fast Sunday last week! That morning I had said a special prayer that I would be able to feel the spirit and would be able to be happy about this baby and Heavenly Father heard me. We had a beautiful lesson in Y.W. about the personality of Heavenly Father and how He knows and loves each of us individually because we are His children. I mean, I know we've had this lesson a hundred times, but it's never really sunk in like this time. And I felt the spirit so strongly! This time it wasn't about how much Heavenly Father knows and loves me, this time I could feel how much Heavenly Father loves this BABY and how He KNOWS this baby. And suddenly it became clear that I'm not just carrying some random human being, I am carrying a precious little child of God! This is a baby with a special spirit who has been saved for the last days and has chosen to come to me because they LOVE me! Suddenly I felt so incredibly humbled and loved and just sooooo grateful! I have had a complete change of heart and it has been so amazing! Every time I feel a little kick I smile. And at night when I'm trying to fall asleep and the baby's hiccups are keeping me awake I don't get frustrated. I enjoy laying there feeling it's every little movement and think about what they will look like, what it will be like to hold them for the first time...allll happy thoughts! :) I am so grateful for Heavenly Father's tender mercies! I've always loved the stories in the scriptures where people have had a complete change of heart and always wondered what that would really be like. And now I know. It really is a miracle. :)

Posted by Natalie at 10:56 PM 1 people leaving some love! 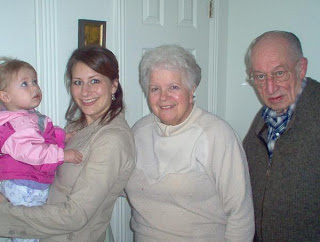 This is a picture of Whitney when she was about a year old, Me, Grandma Tove, and Grandpa Horst. Wow, this picture makes me miss them soooo much! I haven't seen them in almost three years. *sniff sniff* They are so wonderful and I am so very blessed to be a part of their eternal family! I love you Grandma and Grandpa!!!

1. Go to your pictures

I tag Jessica, Mandy, Callie and Melissa and whoever else wants to be tagged. :)

Posted by Natalie at 4:44 PM 3 people leaving some love!

Hello everyone! I have been so bad at blogging lately! Some weeks it's like I have something to say every single day. But the past few months have just flown by and I just haven't gotten around to the blog. Let's see...where to start. Um....OOH! I went and saw "Australia" with my friends Mandy and Pearlette. It was SOOOOOOO good! Oh my gosh, I think it's my new favorite movie. It was funny, and romantic, and action packed...everything you could want all smooshed into a 2 hour and 45 minute movie. Just remember that it's 2 hours and 45 minutes, and half way through the movie when you swear it's just about to end and you're like, "oh, that was such a good movie! But what ever happened to that one guy???" and then the movie keeps going you won't be suprised. There is the cuuuuutest little boy in the movie, he just melts my heart! Seriously, it was such a good movie. Then, to top off a great night we went to Cheesecake factory for a little 800 calorie snack and called it a night!

I went to the doctor this week and everything looks good. I'll be getting the "BIG" ultrasound here in a few weeks so that's nice! I have to admit that this pregnancy has been a hard one. I thought I'd be really connected with this baby already like I was with Whitney and Aaron. I used to talk to my belly and lay in bed just so happy to know that this sweet little baby was going to join our family. I haven't felt that with this one...I don't know why. I really struggle with being pregnant again and the change that's going to come and I just hope that the baby doesn't know that I feel this way. Anyway, I'm hoping that after I have the ultrasound I won't just picture this little alien looking creature taking over my belly and I'll get excited about a new son or daughter and find joy in pink or blue. Oh, and I've been getting a lot of requests for belly pictures. Um, about that...yikes! As a Christmas gift to all of you I'll put one up. After Mike gets me a camera for Christmas! (Got that, Michael?)

We had a nice Thanksgiving. We went out to Dallas to spend it with some of my relatives and it was nice to be with family! The drive went really fast and it was so beautiful! It actually LOOKED like fall! The trees were orange and red and yellow, it made me so giddy! The food was soooo good and we had fun playing the Wii and Guitar Hero and looking at the Black Friday adds! We had to cut the trip short, but I'm glad that we got to spend Thanksgiving with them! Thanks Chris and Brant! :)

The kids are doing pretty good. I babysat a three year old boy for one of the ladies I visit teach last week for 10 hours and his mom didn't happen to mention that he was sick with a cough and cold and needing breathing treatments because it was so bad. So, when he showed up and I heard him hacking up a mucus storm and snot flowing freely from his nose I was soooo close to telling her that I was terribly sorry but I just couldn't babysit him like that because of Whitney's lung problems. And I should have! Now, Whitney AND Aaron have it and I had to start breathing treatments on Whitney last night because she was wheezing and said she couldn't breath. It was a long night. I hope she can get through it okay...grrrr.

Other than that, they're doing good. Every day Whitney asks if it's Christmas yet so I think it's going to be a long month. I went and bought one of those advent calendar things so help her to count down the days to Christmas and that seems to have helped. I got it from Target and it's super cute! It's this one: 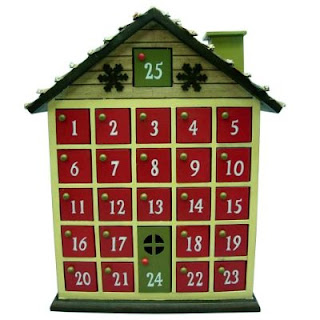 which also matches the colors of our Christmas ornaments this year! (by the way, are you supposed to count up to 25 or count down to 1???) There. Now I've added a picture to my blog and I feel complete. Well, there's the update for ya! I hope you all had a happy Thanksgiving and are now enjoying the fruits of your leftovers! :)

Posted by Natalie at 2:44 PM 5 people leaving some love!