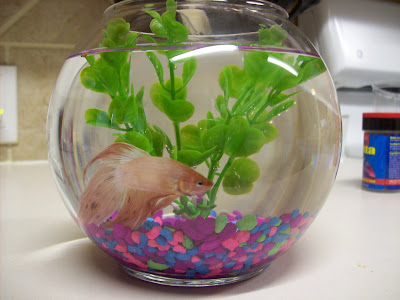 Remember about a year ago when I posted about how Whitney saved up her money to buy a fish? Well, yesterday we got home from dropping Michael off at work and a "quick" stop at Target to find our little Coral belly up. We had known it was coming for a while because the poor thing was having a hard time swimming and would just lay on the bottom of the bowl on it's side...but I didn't know what to do about it and I didn't want to kill it...so we just patiently waited. Poor little Whitney, though! She was just heartbroken! It was the first time she's ever had a real emotional meltdown like that, and it was just so sad to watch. She wanted to call Mike at work to tell him and she just sobbed on the phone. We've never had a pet die before, so I wasn't sure how you're supposed to handle it, so my first method was to throw a Coral party. We had cake and ice cream and celebrated that she was now in animal heaven with Ginger (who was my family's dog growing up) and Guido (who was Michael's parent's evil cat) and of course Nemo's mommy and she was so happy there! I think Whitney felt a little better after the sugar high. Then we made a little box to bury Coral in and Whitney decorated it with stickers and wrote "I'll miss you, Coral!" on it. It was really cute and I wish I would have taken a picture of it- I tried but the camera died. We buried it this morning in the backyard (should have done it yesterday because it was already starting to...nevermind). Anyway, I just love my little tenderhearted Whitney. This has been a hard time for her, but it has given us a good chance to talk about death and life and how families are forever! And Coral will always have a special little place in our hearts. :)

Posted by Natalie at 3:14 PM 7 people leaving some love! 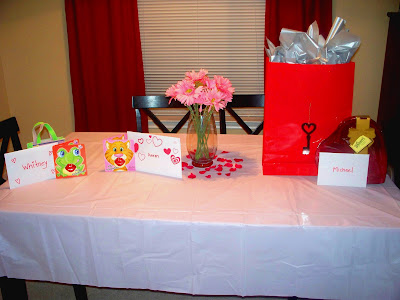 Happy Valentines Day! I hope you all had a wonderful one! Ours was pretty great. I set up the table the night before so that when the kids woke up and came down the stairs they would see special valentine gifts for each of them. I LOVE the sound of their excitement first thing in the morning! Whitney shouted, "Oh....my....GOSH!" (totally sounded like a teenager) and it was just soooo cute! It's so fun to do special little things for them to let them know how much I love them and to bring their lives some joy. (Speaking of joy, the kids are playing outside right now and keep running back in with handfuls of clovers and dandelions for me...). Michael was pretty excited about the new drill he got this year (yes, that's a drill in the red gift bag, not lingere.) After they were done reading their cards and eating their chocolates, I made pink heart shaped pancakes with strawberry topping and whipped cream for breakfast. It was so fun!

I can remember waking up on Valentines Day when I was little and my mom always did something like this for us. She would make the cutest little heart shaped cakes and leave them on the piano for us to find in the morning, and every year for as long as I can remember she would give us those little heart shaped boxes of Russel Stover chocolates. She still sends a Valentines Day package for us every year with treats and chocolates. I'm so happy to have Valentines Day, and get to celebrate that wonderful thing called LOVE!

LOVE - a wildly misunderstood although highly desirable malfunction of the heart which weakens the brain, causes eyes to sparkle, cheeks to glow, blood pressure to rise and the lips to pucker. ~Author Unknown

Posted by Natalie at 10:31 AM 5 people leaving some love!

No Fear of Flying

Today we decided to take a little family trip out to Galveston to the Lone Star Flight Museum. It was a gorgeous mostly sunny day, 77 degrees...perfect! It was really interesting to drive through Galveston and see all the damage. It was just crazy! There were so many parts of it that were just completely trashed and abandoned, it was really sad. I wish I would have taken some pictures...

The museum we went to had been damaged, but was able to fly out the planes that were in flying condition before the hurricane. The ones who couldn't fly had to stay behind and get flooded. So, half of the museum was still closed so they could fix the planes. We got to see some pretty cool planes anyway. Aaron LOVES airplanes, he's pretty much obsessed with them so it was really neat to see his face when he woke up from his little nap in the van, looked out the window and saw an F-100 Super Sabre! 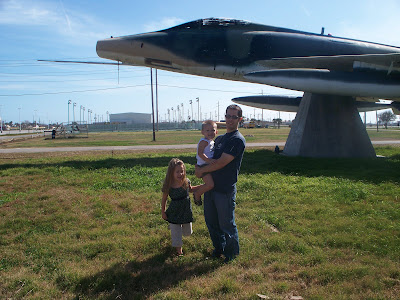 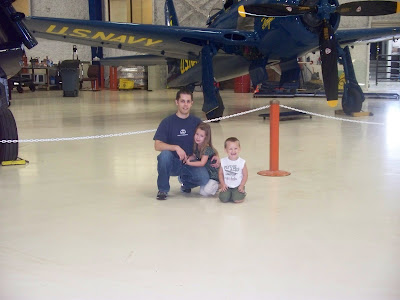 You can't really see it very well, but seriously, just look at that big smile! It was like being in a candy store. Here they are in front of one of that actual Navy Blue Angels F8F Bearcat! These were designed to defend against the Japanese airborn kamikaze attacks in the 1940's. It was a pretty sweet little plane! 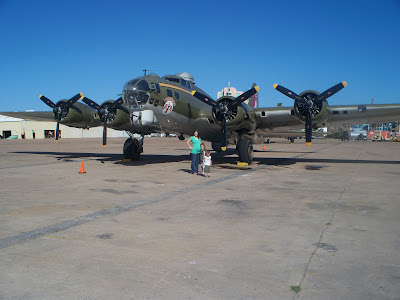 This is us in front of a B-17 Flying Fortress. These are one of my favorite planes. Can you imagine the rumble of the formations of these beasts flying overhead with their 4 engines? Sooooo cool!!! These bombers were amazing. They were used in WWII to bomb Germany and during the Pacific war to bomb Japanese ships. They dropped more bombs during WWII than any other bomber. They could defend themselves and they could get back home even after being all shot up. Seriously, these planes were AWESOME!!! Ever see "Memphis Belle"? And, if you look reeeally closely, you can see me in all my pregnant glory. haha. Yes, I am standing next to the B-17 to make me look smaller. 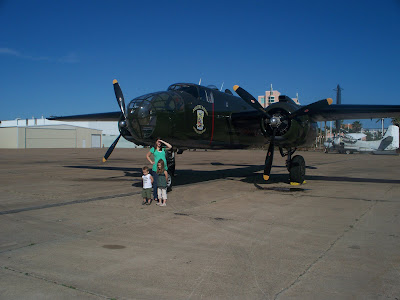 Here's us with a B-25 Mitchell. This plane was actually a very humbling experience to get to see. This is the plane that they used in the Doolittle Raid over Tokyo in April of 1948. Don't know what I'm talking about? If you saw "Pearl Harbor" (the one that came out a few years ago with Kate Beckinsdale and Ben Affleck), remember at the end they had to fly those planes off of the back of the battle ship with an insanely short takeoff? They launched 16 of them and 15 of them crash landed somewhere around eastern China. The men who flew these knew it was most likely a suicide mission, yet they still went and defended their country. Thankfully, of the 80 men on the planes, 69 of them eventually made it back to U.S. lines.

Well, there is your history lesson for the day. It was so nice to be able too get away for a day and do something as a family! It's something I think we'll do a lot more often. :)

Posted by Natalie at 8:44 PM 6 people leaving some love!