I feel like I haven't written in forever! Guess the most exciting thing that's happened recently is that Mike got an M-1A SOCOM 16 for Father's Day. He's wanted one his whole life and he really deserved it. We had several guns when we first got married, but he had to "sacrifice" them so we could pay our bills while he was in college. It was hard for him, but it was all we had that we could sell. So, I'd say this pretty much darn well makes up for it! (The thing was a pretty penny!)

I'm amazed at how my views on guns have changed since I met Mike. I grew up afraid of guns, I had never seen one in real life and I always associated them with "bad guys" in movies and crazed hunters and such. So, when we were first dating and he wanted to take me shooting in the foothills I was absolutely terrified. I was pretty sure that one of the guns would shoot me in the car while we were driving because we'd hit a bump or something. But after the first time I shot one I was hooked! It's now one of my favorite past times. (I particularly like shooting fruits and vegetables, stuffed Barney and scary clown toys!) I have learned to respect guns and see how they can be used to protect people and families.

There are around 60,000 reported and an estimated 1.5 million unreported cases per year of people who stopped crime through the use of firearms. That's a lot! I wish the anti-gun lobbyists would state that in all their "Guns are bad!" statistics. I'm not against them not letting psychos have guns, I think the background check is a wonderful idea, but it's not fair to take them away from the rest of us NOT crazy people. In Mexico there is a law that prohibits people from having guns. But do you think that stops the "bad guys" from getting them? HECK NO! It just makes it so the bad guys who don't follow the rules have guns and the good law abiding people have no way to protect themselves from the bad guys. I don't understand why they would want to do that here. (I get so fired up about gun control. )

One of our friends in Golden had someone try to break into their house in the middle of the night. He told his wife and kids to hide and he went and called the police. Luckily, he had an old collector's revolver (no bullets, though-but the robber didn't know!) and when the man who was breaking into the back door came in and saw the gun in our friend's hand he turned around and got the heck out of there! And guess what, the police never showed up. Now, what might have happened to him and his family if he didn't have that gun? I sure don't want to know. And it also goes to show that you can't count on police or anyone else for that matter to save your butt.
Hmmm. Well, I sure wasn't expecting my blog to turn into this! LOL. Anyway, it was a great Father's Day present, and I'm looking forward to making some big purple and green stuffed dinosaurs bite the dust. Bye-bye, Barney!

Posted by Natalie at 9:32 PM 5 people leaving some love!

Posted by Natalie at 1:45 PM 2 people leaving some love! 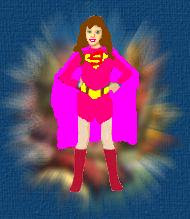 THIS IS FOR YOU, NICK AND DIANA!!!

Posted by Natalie at 10:33 AM 3 people leaving some love! 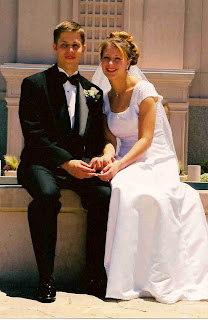 This weekend is our 6 year anniversary! I can't believe it's been 6 years!!! Here are just a few memories of our wedding day:

On the morning of our wedding, my Aunt and Uncle (and their gazillion kids) were there and I had to wait for all of them to finish with the showers. I did my own hair as fast as I could, did my makeup in the car, and ended up being almost an hour late for my own wedding. Michael was convinced that I had chickened out! Poor guy. The temple workers were probably trying to console him before I walked in. Then, I forgot the big poofy skirt thing that goes under the dress, so my dress was all saggy. AND, I forgot my bouquet in the temple so I didn't get to use it in my pictures. Nonetheless, it was a beautiful, glorious day! As we sat in the Celestial room before we went into the Sealing room, I remember looking at Michael, all dressed in white, and I had this familiar feeling, like I could remember him from before, in another time and place. Suddenly I knew that this was truly meant to be and thinking, "we actually found eachother!". We had a wonderful Sealer and the one thing I remember him saying was that as long as we kept the Savior at the center of our marriage, everything would work out and we will be together forever! I hope we can be faithful and worthy of such a wonderful blessing.

Posted by Natalie at 7:03 AM 11 people leaving some love!

Boy, I think it's safe to say I fell off the diet band wagon already! With company all week (they left home yesterday morning-phew!) I haven't been able to exercise (that would be a little embarrassing with 5 relatives sitting on the couch watching!) and haven't really paid attention to what I ate (okay, maybe I did pay attention, but what Dominos Pizza sounded a heck of a lot better than a peanut butter sandwich on whole wheat! And who can have pizza without a big fat glass of root beer???) So now I'm totally depressed and feel fat and gross. Guess I'll try and jump back on the wagon tonight! I hope it drives by slowly....

Posted by Natalie at 6:49 AM 0 people leaving some love!