Well, the news said that we have a 3% chance of winds from Gustav. I cracked up when I heard that! We were invited to go to Dallas to spend time with some of our Family for the weekend and it was going to be so much fun! But then we got sort of freaked out with the hurricane and everyone talking about how it could shift, or we could still lose power, blah blah blah...and so we decided not to go. And now...I feel like a complete idiot. Never again...never again. Fool me once, shame on you. Fool me twice...shame on me. Fool me three times, and I just need to stop watching the news!

Posted by Natalie at 8:06 PM 2 people leaving some love!

Here's the latest update on Gustav's projected path. They're guessing the coast of Louisiana will get the worst of it. The Governor of New Orleans was asking to send all of the evacuees here to Houston again, and our Governor had to turn them down. A lot of the reason was because the meteorologists still think there is a chance it could shift more towards Houston, and then all the evacuees would be here and that would cause absolute chaos. Not only would they have to worry about helping it's own residents, but it would also have to be responsible for the thousands of refugees from New Orleans and there would be no room in shelters for our own people. It's kind of sad that we had to turn them away, but I guess you gotta do what you gotta do in a situation like this.

It sounds like we'll still get some winds and rain, but it should be okay. So, please keep the people of Louisiana in your prayers next week, especially those who don't have the money or resources to evacuate. This weekend is the third anniversary of Katrina. We hope that they've learned from Katrina and are more prepared now....but you just never know what will happen.

Posted by Natalie at 1:36 PM 1 people leaving some love!

A few matters of business...

This Thursday our Relief Society is having a 72 hour kit readiness night for Enrichment and the men are invited, too! I hope lots of people go...it looks like it's pretty good timing! The weather forecasters are predicting Gustav to become a major hurricane (catagory 3 or higher) as it enters the Gulf of Mexico. I think it'll curve up more towards Louisiana, but we'll keep a close eye on it. 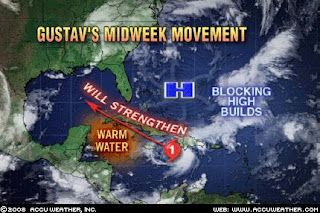 Other news, yesterday I was in the pantry getting out stuff to make lunch, and I noticed there were ants in the marshmallow bag. Then, I looked on the walls and there were ants crawling up the walls! I was so mad! We just had to pay the the pest control guys $75 to come and spray because fire ants were crawling all over our kitchen floor and the carpet in the living room. They sprayed all over the house, and still, these annoying ants still get in! I had to empty out the entire pantry (which took forever!) and spray the walls and floor with raid, wait for it to dry and then put everything back in (which also took forever!) Hopefully that takes care of them. 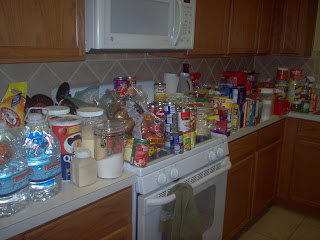 We went to Quintana beach on Saturday with a few other families from the ward and had a lot of fun! The weather was great and the water was warm. These kids sure are water babies, they had so much fun playing in the waves and throwing shells and rocks into the water! This is the best picture I could get...I think Whitney's eyes were closed in every single one! 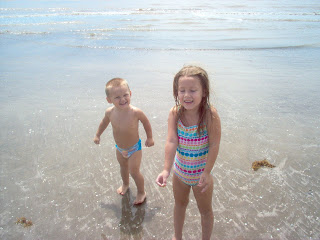 Posted by Natalie at 7:55 AM 5 people leaving some love!

Okay, I feel really lame that I haven't posted in a while. I couldn't seem to think of anything cool enough to put on here. And then I realized that if I'm using this as a journal of sorts, it doesn't necessarily have to be cool...because let's be honest not all of life is cool. (Which gets me thinking, how on earth did we get "cool" to mean anything other than describing a temperature?")

So, let's see. What have I been up to. A week or so ago my good friend Sarah called and asked if she could babysit so we could go on a date! (Seriously!) So, of course I said yes and she came over and watched the kids while Mike and I went to the bookstore so he could browse without having to chase two kids around and trying to keep Aaron from ripping pages out of any books. It was nice to get out and just be "Mike and Natalie" again, and to suddenly realize, "Oh my gosh, I have a crush on my husband!". I think maybe we need to go out more often...

What else...oh! I painted our entire living/dining room area! It's a nice tan-ish neutral color called Harvest Wheat and it looks great! My wonderful paint job lasted almost a week before Aaron got to it and drew me a beautiful purple mural. Now I get to re-paint two of the walls...wait, no, make that three walls and 2 doors. But, every kid needs that picture of his childhood masterpiece on the wall to laugh at when they grow up. So, now he's got his...and I'm a lot more careful about making Whitney put away her markers when she's done coloring.

Mike's uncle passed away last weekend. He is a police officer in Salt Lake City and he was doing a routine traffic stop in the Provo canyon when he collapsed at the passenger's window. The woman he pulled over and a passerby did CPR on him, but he didn't make it. He was such a funny and amazing guy, he will be missed! Once, he pulled over this big fancy sports car that was speeding by quite a bit and it turns out it was Steve Young! Steve said "Hi, I'm Steve Young, I'm the football player..." and Mike's uncle said, "Hi, I'm Scott Hathcock. I write tickets, here's yours." Gave him a smile, and that was that! He also pulled over Robert Redford once, and Robert didn't give him any trouble. I mean, really, these guys are millionaires, so why complain about a thirty dollar ticket, you know?

Oh yeah! And remember how my dear, sweet husband put my craft stuff out in the garage so he could have his "man room"? Well, I went out yesterday to get my scrapbook paper (it's in one of those big organizer bags) and it had been over-run with spiders! Yuck! After seeing all of the spider webs and little baby spiders crawling out of it I was furious, and decided that those dumb little spiders could have it. There was no way I was reaching in there to find the mama. Grrrr.

And that, my friends, is what you've missed. If only I had matching pictures for all of this. Man, I have GOT to get a new camera........oh man. I smell a dirty diaper. Guess my time is up! Until next time, Ciao!

Posted by Natalie at 12:34 PM 4 people leaving some love! 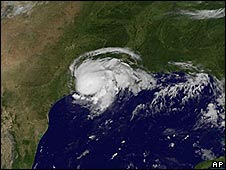 Have you ever gotten yourself all hyped up for a movie that's supposed to be really good, and it turns out to be a total flop and you feel like an idiot for ever going and spending $15 on that popcorn and soda? Well, that's the story of Tropical Storm Edouard. Usually, I track these things as soon as they turn into a tropical depression out in the Gulf, but I got lazy and didn't find out about it until I was checking my email and Yahoo News said "Tropical Storm Edouard Barrels Down On Texas". Boy did I feel dumb! How could I have missed this? Luckily, I knew we already had our water and emergency supplies so I didn't have to worry too much. I stayed tuned into the weather channel and accuweather.com, and they got me all hyped up that it was going to turn into a category 1 hurricane (winds 74 to 95 mph) and that there would be power outages and tornadoes and to bring all our stuff in from outside so the strong winds didn't turn them into projectiles. It was supposed to make landfall pretty close to us, so I was thinking, "Wooo-hoooo! We're going to get to try all our stuff out for real!". I even went to Wal-mart to get an air conditioner and a camp fridge to hook up to the generator if the power went out. It was such a rush, even from the Wal-Mart parking lot. It was absolutely packed! We're talking day before Christmas packed! People were scurrying around looking for grocery carts because there weren't any in the entrance, and those that did have grocery carts were loaded up with water and Gatorade, food, batteries, tarps, etc. The water isle was completely cleaned out! So, of course that got me even more worked up! I was like, "Man, if these people are this hyped about getting emergency stuff, this must be a bad storm heading our way! They obviously know something I don't!" It was awesome. Then, all that night I dreamed about hurricanes and windows breaking and hooking things up to the generator and trees blowing over.
Yesterday morning, around 6:30 I woke up and heard rain. I got so excited! I got up and ran to the window...and the trees were standing absolutely still. And that's all that happened...allll day long. Just a nice little rainy day. No wind...no trees blowing over...no power going out...nothing. The storm didn't hit where they thought it would hit, and it didn't reach hurricane strength either. Which, I know is something many people are counting their blessings about. And silly me, I'll just have to wait to play with my toys another day.

Posted by Natalie at 7:20 AM 5 people leaving some love!